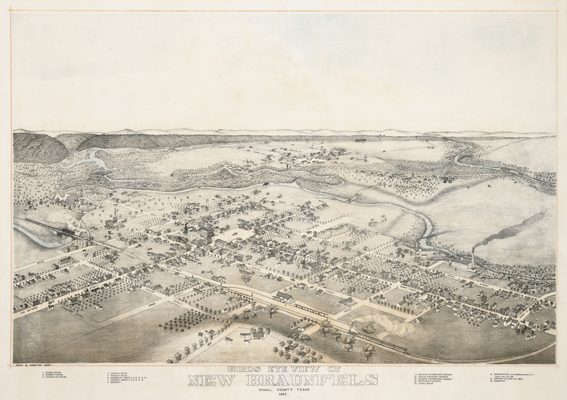 The propaganda of the Mainzer Adelsverein worked very well. Between 1844 and 1847, over 7300 emigrants moved to Texas. Galveston was the first point after weeks of travel on the sea. The first settlers were received by Prinz Carl zu Solms-Braunfels, an ambassador of the Adelsverein who was commissioned to buy land and organize all important thing. After he had sat up swindlers and put a lot of money in the sand, he finally managed to obtain a settlement permit between Austin and San Antonio – without even having seen the area before. Agriculture was difficult on the mountainous country and furthermore it was in the middle of the Comanches. On March 21, 1845 Prince Solms founded right here New Braunfels. Despite of the difficult situation, the place developed in the 1850s, the fourth largest city in Texas.